The Kart module is a Summer School module for students between 3. and 4. semester. It's a home-made car remotely controlled by a smart-phone.

The work of the students can be summarized in four main tasks: 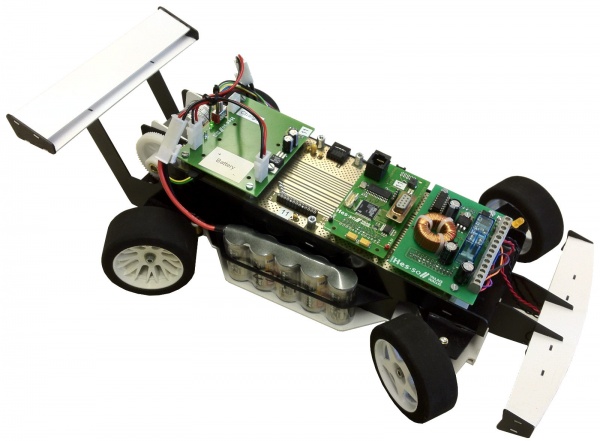 The kart is controlled by a smartphone via Bluetooth.

A Bluetooth receiver on the kart communicates via an RS232 serial link with the FPGA control board.

The control is distributed over several FPGA boards connected together via I2C:

A Bluetooth communication transfers serial port data. A receiver chip creates the RS232 signals for the FPGA. The protocol defines how the registers are accessed.

The FPGA sends following information back:

The FPGA motherboards are equipped with an AGL125 IGLOO in a VQ100 package. They connect to daughterboards which drive different parts of the Kart. The motherboards are interconnected via an I2C link.

The base kart sensors are:

In order to start the projects you should do the following: