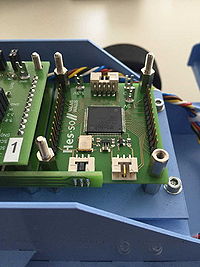 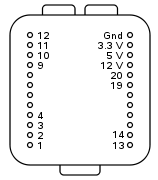 A test board routes the FPGA motherboard connector pins from one to the next. The path also includes the SCL and SDA pins of the bus connector. The path extremities are located on spare I/Os of the JTAG programming connector. Each pair of pins are also connected to a LED, which shows to what extent the signal path is functional.

The RS232 to USB board can be used as an FPGA mezzanine with only the FTDI USB to RS232 chip mounted.