Based on the VMEbus and inspired by the ARM AMBA3 AHB-Lite, this backplane bus is synchronous and master-slave oriented.

The table below presents its signals, which can be divided into three groups:

The main parallel bus is like a CPU bus, with address and data. All operations are synchronous relatively to the main clock MCLK. The master can write or read on slaves, via the usage of the signals Axx (address), Dxx (data), WR (write/read operation flag), and EN (enable operation). Please note that the data bus is bidirectional.

10 IRQ bits are available and freely usable for the target application. However, some pins have shared functions. E.g. ECC and IRQ uses the same pin. Therefore its functionality need to be choosen during development, and can minimize the number of IRQ Pins available.

The table below represents the signal mapping on the DIN41612 3x32pin.

Some well-known serial protocols (UART, SPI, I2C) have been added to the mapping for allow simple communications with and between cards which are only equipped with µC because of their incapacity to interface the main parallel bus.

For physical reasons (notably routing 2 layer “HES-SO” PCB with small FPGA/µC), there is the possibility to use the A and C row only – therefore, the data (Dxx) and the address (Axx) bus are both divided by two. The bus can host both 3 rows (A15..0/D31..0) and 2 rows (A7..0/D15..0) slave boards, respectively named 32bit and 16bit slaves. Addressing of each type of slave is done with the MODE bit, acting like an “Axx’high+1” address bit. Note that ECC is supported for both modes (16bit mode use less ECCxx bits – 5 instead of 7). The last ECC bit (ECC07 or ECC05) is de facto not used, but reserved for further better ECC coding.

1 These pins connect to a GCLK pin on the FPGA 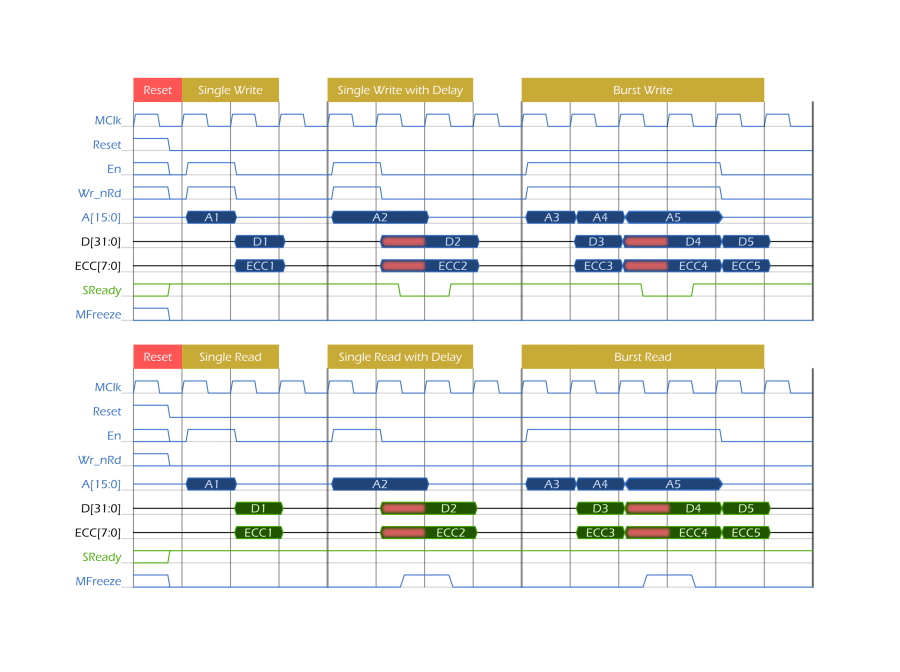 The upper graph presents a write operation, where the master set the address (with corresponding ECC code) and the EN / WR flags. Next cycle, the data are placed on bus. The slave can pull-down the SReady line until the ECC code verifies correct data integrity on the bus.

The lower graph shows a read operation in which the master set the address and the EN / WR flags. Next cycle, the slave takes control of the data line and places the corresponding data. In case of integrity failure, the master set high the MFreeze until data is considered as valid by verifying the ECC.

All operation can be pipelined, including interleaved read/writes.

The slave could hold down the SReady line until the read/write operation is done, but this case has not been considered yet.