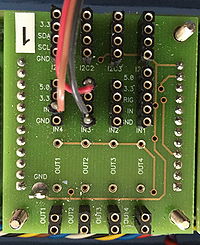 The counters shall increment at each Hall signal pulse or, twice as fast, at each square signal edge.