The DC/stepper control board hosts a dual full H-bridge to control the 4 coils of the stepper motor.

The end switch is connected between one of the FPGAs I/O with an internal pull-up enabled and the GND. The logic is internally reverted (i.e. a '1' is read when the switch is closed).

The cables are connected as follows: 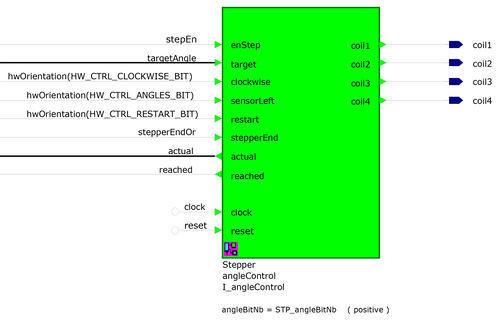 The stepper motor controller has to generate the 4 phases to turn the kart's steering wheels to the desired angle. The target angle is set in the desired steering angle register.

To begin with, the design environment has to be downloaded. It comprises the stepperMotorController block which contains the registers and events manager and an empty angleControl block which is to be completed.

The block receives a targetAngle unsigned number and has to step the coils at each occurrence of the stepEn signal until the desired angle is reached.

The coils are controlled through the 4 outputs coil1 to coil4. When a '1' is applied, the corresponding coil is magnetized.

To control the stepper, one coil at a time should be magnetized, known as wave drive.

The switching frequency should also be chosen carefully. A frequency of 285 Hz is near the slip limit of the motor. The frequency is given by the formula : f = 100k / prescaler. A prescaler (clockDivider) of 400 (i.e. a frequency of 250 Hz) is a great first approach.

The steering angle, actual, is estimated with the help of a counter which increments or decrements each time the coils change.

It is joined with a logic signal, reached, telling if the desired angle has been reached. This information is sent back to the controlling smartphone.

A switch contact, providing the signal stepperEnd, has to be mechanically fitted on the kart in order set one end of the wheels' direction movement. As soon as stepperEnd is '1', the stepper motor is stopped and the actual angle is reset.

With this, the steering motor will not try to turn further than what the kart's mechanical structure allows it to do in one of the directions. In the other direction, it is the programmer's task not to request a too large target angle. This also means that the angles are always considered as positive numbers, the zero position being given by the stepperEnd switch.

Draw the schematics of the angleControl block. 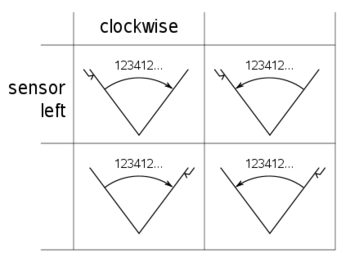 The mechanical design allows for the following variations:

In order to cope with all possibilities, 2 setup signals are provided to the block:

The corresponding setup bits are configured in the hardware control register.

Update the schematics of the angleControl block in order to cope for the different mechanical design possibilities.

The hardware control register also contains the bit restart indicating that the stepper motor has to turn all the way back until presswing the stepperEnd.

This has to be sent by the remote control smartphone after a successful Bluetooth pairing, together with the appropriate sensorLeft and clockwise setup bits, in order for the FPGA hardware to discover the zero angle position. Obviously, this should only be done after the Stepper motor period register has been set to a proper value.

Restarting to the zero position can also be a help if too much current has been drawn from the batteries and the FPGAs' power has sunk in a way that they have performed a reset.

Update the schematics of the angleControl block in order to turn all the way to the stepperEnd position once the input restart has been set.

The stepper motor should wait for the restart signal to be released before acting normally.

It should not turn while a first restart has not been performed.

The Stepper motor functionality can be tested through the StepperMotor_test -> stepperMotorController_tb block.

The corresponding simulation layout file for Modelsim is available under $SIMULATION_DIR/Stepper/stepperMotorController.do. It will automatically run the simulation if it has not been modified.