This IP can be found on the EDA Repository: svn: https://repos.hevs.ch/svn/eda/

The modulator architecture is of Cascaded Integrators with Distributed Feedback (CIDF).

An additional parameter, shiftBitNb is used to ensure stability. Adding 1 to shiftBitNb reduces the STF by one octave (a factor of 2). This value has to be adjusted within a simulation loop.

The VHDL entity of the modulator shows the generics, the inputs and the outputs:

The en would allow to work at a smaller frequency than the clock's. As Sigma-Delta modulators should work at high rates, en is usually set to 1.

The testbench generates a sinewave input to the modulator. Clock and signal frequencies are defined as constants in the top-level architecture and passed to the tester via generics. 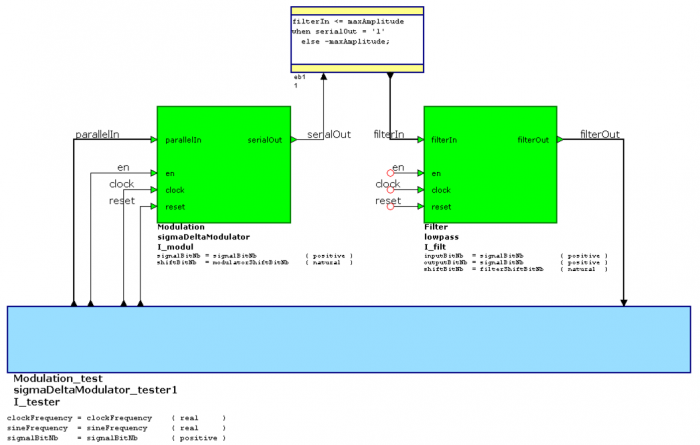 The modulator output is fed to a lowpass filter which reconstructs the original signal. The lowpass we use also has a parameter shiftBitNb which can be used to shift the cutoff frequency octave by octave. As a matter of fact, the testbench filter has the same structure as the sigma-delta modulator. The only difference is that it hasn't a comparator at the output which reduces it to a single bit.

The lowpass filter VHDL code allows to select filter order (presently Bessel 2, 3 or 16) by commenting/uncommenting constants at the top of the architecture. For the choice of the filter order, one has to consider the following points: