The board was designed for the SEm VHDL FSM lab.

It has a beeper which can emit a Morse code signal and a microphone for receiving it.

The beeper is driven directly by a digital I/O line.

The microphone's output is amplified and connected to an ADC. The amplified signal is also triggered in order to deliver a simple digital input to the FPGA.

The microphone's output is quite small. It is first fed to a fixed amplifier through a passive RC highpass. After this, it is brought to an amplifier with a variable gain, and finally to a trigger.

The buzzer/microphone couple have 2 resonant frequencies: one around 3 kHz and the other around 4 kHz.

The trigger is a Schmitt trigger. When there is no signal, the trigger output can be as well low or high. 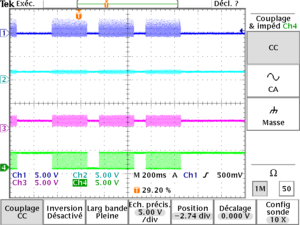 To come to these signals: