The Precision Time Protocol allows to synchronize clocks over a distributed network with a precision range below the microsecond. A reference clock is defined (the grandmaster clock) and all other clocks (slaves) adjust their time to it. Timing messages exchanged between a master and a slave enable the slave to determine and correct the clock offset as well as the network delay. 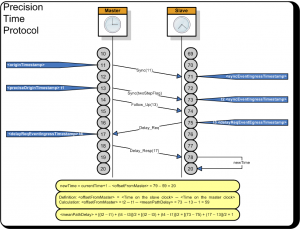 There are two elements to synchronize: offset and delay.

In a second step the network delay is calculated. The slave sends a Delay_Req message to the master. The master then responds with a Delay_Resp message containing the reception time of the Delay_Req message. With this information the slave determines the delay of the network by calculating the difference of the transmission time of the Delay_Resp message and the reported reception time.